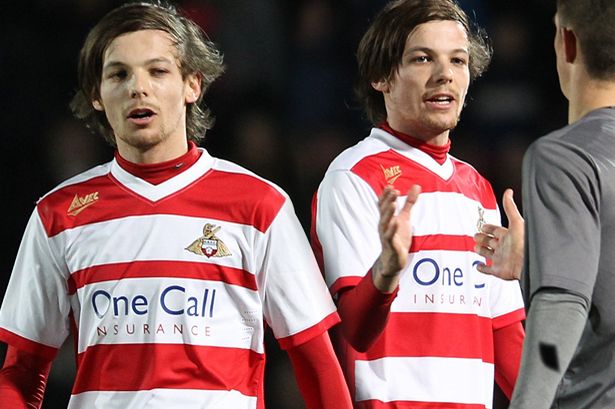 The football mad One Direction star, who owns the club and plays for The Vikings’ reserve team, has joined forces with businessman John Ryan and Crowdfunder to try to rake in as much money as he can.

The campaign, thought to be one of the biggest UK crowdfunding campaigns, was launched in London yesterday and saw the boy band hunk ask Directioners and footie fans to join him making pledges of cash to the club.

The Tomlinson Ryan Trust has already agreed to contribute an undisclosed, six-figure sum.

Louis, 22, recently founded the trust, which aims to support and develop Doncaster Rovers, alongside Mr Ryan, the club’s former chairman.

In return for pledges of cash, the trust will offer a selection of rewards from £5 upwards.

Louis said: “For me, this is all about the football, the community and restoring the excitement and desire to making Doncaster Rovers the most exciting club to play for in Yorkshire.

“I want to see the Doncaster Rovers supporters get the club the success it deserves.

“I grew up in Doncaster and have felt the love for football run through the town, it’s for that reason that I have a real personal passion to make Doncaster Rovers a success story.

“This is a big step which I believe will open up opportunities to provide a very, very exciting future for the club and its supporters.”

Mr Ryan said: “By setting up the Trust, launching the crowdfunding campaign and putting our own money in, we are making it clear to Doncaster Rovers supporters, and the general public, that we are planning to give the club the support and resources it needs.

“As its previous Chairman I am still totally committed to developing an exciting future for the club.

“The objectives of the trust provide a roadmap to make the club an even greater success.

“I am very pleased to join forces with Louis to make this happen.

Rob Love, Chairman of Crowdfunder.co.uk, said: “It’s been really great to work with John and Louis on this project.

“They clearly have an enormous passion to create a bright future for Doncaster Rovers.

“It’s a partnership we are delighted to be part of.”

To make a pledge, go to www.crowdfunder.co.uk/trust