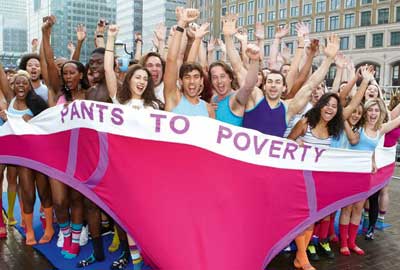 A report by the innovation charity says that crowdfunded schemes, such as Pants to Poverty, account for 95 per cent of all online alternative finance platforms in the UK

Charitable fundraising sites and donations-based crowdfunding raised £310m in the UK in 2013, according to new research by Nesta.

The innovation charity’s report, the Rise of Future Finance, published today, shows the UK’s alternative finance market grew by 91 per cent from £492m in 2012 to £939m this year.

Alternative finance models include different types of crowdfunding, such as donations-based and reward-based, peer-to-peer lending, peer-to-business lending and microfinance and community shares schemes, the report says.

The report, which is a joint project between Nesta, the University of Cambridge and the University of California, Berkeley, in the US, is based on information from more than 50 alternative finance intermediaries, including crowdfunding platforms such as Buzzbnk and fundraising sites like JustGiving. These 50 intermediaries account for 95 per cent of all online alternative finance platforms in the UK, the report says.

The donations sector is the largest in the market and has raised £785m in the UK over the past three years for charities and social projects, the report says, and has experienced growth of about 20 per cent year-on-year.

Over the past three years, the overall market had an average growth rate of 75.1 per cent and contributed a total of £1.74bn of charitable, personal and business finance to the UK economy, the report says.