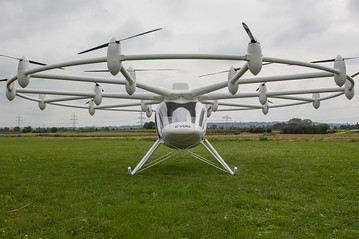 It seems Germans can’t get enough of electric helicopters. And who can blame them?

Startup e-volo raised more than €600,000 ($814,794) to fund its two-person, lightweight, 18-rotor electrically-powered helicopter, or “Volocopter,” on thecrowd-funding website Seedmatch. The majority of the investments, ranging from €250 to €2,500, came from private donors. A few made more major contributions, amounting to as much as €10,000.

The Volocopter prototype, VC200, which recently completed its maiden voyage, is in the ultralight aircraft class, meaning it can transport two people and up to 450 kilograms (992 lbs) total. The machine uses a joystick, which is much easier than a typical helicopter, and thanks to it being electrically powered, avoids many of the typical maintenance pitfalls.

The e-volo’s financing plan values it at around €7 million, according to Seedmatch. The company’s business plan anticipates sales of around €2.2 million beginning in 2016.