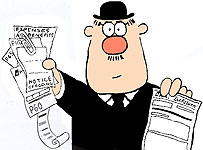 In many cases, the money raised on crowdfunding websites like Kickstarter and Indiegogo — for everything from independent films to quirky device prototypes — might not amount to much, but it still counts as business income, according to the Canada Revenue Agency.

Tax attorneys and several media outlets reported earlier this week that a recent interpretation the CRA issued in response to a query about crowdfunding makes clear that if the money raised is related to professional or business activities, then it qualifies as income.

“The struggling artist may not see what he or she does as a business. They may just think, ‘Hey, I’m raising money here to launch a record or produce movie,’ ” said Ted Citrome, a tax attorney with the Toronto firm Cassels Brock, in an interview with CBCNews.ca.

But no matter how small-scale the activity or how little the amounts pledged, if the funds are used to conduct business, they will be taxed.

“In our view, amounts received by a taxpayer from crowdfunding activities would generally be included in income pursuant to subsection 9(1) of the [Income Tax] Act as income from carrying on a business,” the CRA said in an Aug. 16 letter that was made public this week.