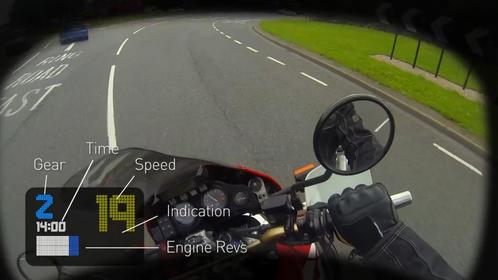 Stoke-on-Trent, UK, 10 October, 2013, Bike Systems today announced that it is seeking crowdfunding investment through Seedrs at www.seedrs.com/startups/bike-hud to support the launch and ongoing development of its new Bike HUD heads-up display for motorcyclists. Bike Systems will be launching Bike HUD at the Motorcycle Live show at the National Exhibition Centre in November 2013. The product will be shipping shortly thereafter and the first Bike HUD customers will receive their units in early December.

The company was founded in 2012 by motorcyclist enthusiast and engineer Dave Vout. Bike Systems, won grants from from the Manufacturing Advisory Board (MAS) and the Derby Enterprise Growth Fund for prototypes and conducting trials with motorcyclists including commuter and leisure riders to motorcycling instructors and British Superbike racers.

Designed to be fitted to any motorcycle, from modern sportbikes to 1960’s classics, the in-helmet display fits full-face and most flip-front helmets. Bike HUD includes custom display modes for track day racing, commuting and touring.

“Bike HUD is intended to work in the rider’s peripheral field of view and make riding safer,” said Vout. “In a high pressure environment an average person can only absorb three sets of information at any one time. Bike HUD typically shows three main data sets, for example speed, gear and engine revs.”

“Bike HUD’s display and alerts provide the rider with important information without causing a distraction from the road and traffic conditions. Of course, if the rider wants to read the numbers on the display her or she can; the optics place the image at infinity so there is no need to re-focus when reading the display”, continued Vout.

Although Vout sees Bike HUD as primarily improving safety on the road, he recognises it potential with more demanding riders, such as track day motorcyclists.

“For racers, we are giving riders the kind of telemetry and feedback that not even professional race teams have access to by getting real-time feedback fed directly to rider’s helmet”, said Vout.

Limited quantities of Bike HUD will be available on a first-come first-served basis from the www.bike-hud.com website in late November. The first units will ship in early December.

The Bike HUD system, comprising of an in-helmet display, on-board computer (Bike HUB) and handlebar-mounted control panel will retail at less than GBP 400. Final pricing information for Bike HUD and accessories will be released in November.

Video, high and low resolution images of Bike HUD, logos and spokespeople can be found at www.bike-hud.com/about-us

There are three components to Bike HUD: the in-helmet display, the controller (Bike HUB) and a handlebar mounted control panel. The in-helmet display can be installed on most full-face and flip-front helmets in minutes, and can be moved between helmets. The Bike HUB controller is about the size of a smart phone, it and the control panel can installed on the motorcycle by any competent DIY or auto-electrician.

The “Hurt” Study reported that ‘typical motorcycle pre-crash lines-of-sight to the traffic hazard portray no contribution of the limits of peripheral vision; more than three-fourths of all accident hazards are within 45deg of either side of straight ahead’. Bike HUD works in the rider’s peripheral view and by doing so, it in no way intrudes upon the rider’s all-important forward view of traffic. It takes about one second to scan motorcycle instruments, when travelling at 50mph this equates to the rider being ‘blind’ to the road for at least 70 feet (21m) – with Bike HUD, the rider always has eyes on the road.

About Bike Systems
Bike Systems was formed in 2012 and seeks to make motorcycling safer and more fun, the company’s core product is Bike HUD, a heads-up display for motorcyclists. Dave Vout, the Managing Director, is a motorcycle enthusiast and has a successful track record as an engineer, having built a thriving engineering firm, GDS Rebar. Bike Systems is a trading name of Motorcycle Information Systems Technologies Limited.