The crowdfunding caveat: Most campaigns fail 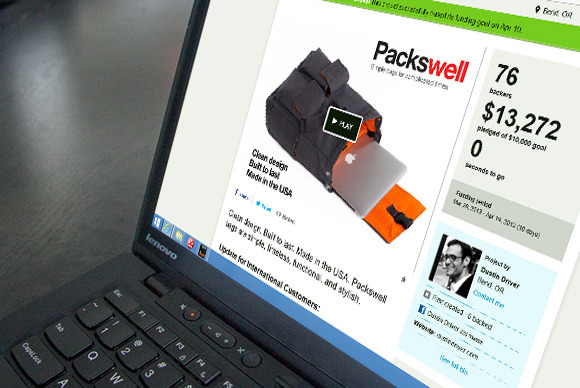 The crowdfunding caveat: Most campaigns fail

In April 2013, Dustin Driver looked like a poster boy for Kickstarter success. His tech-savvy backpack venture, Packswell, exceeded its funding goal by 33 percent. He had done his homework in advance, lined up materials and local manufacturing, and produced a great prototype. With more than $13,000 raised in his 30-day Kickstarter campaign, he was ready to hit the ground running. Then reality set in.

Manufacturing delays and mistakes at the factory halted his progress. By late September, after several daunting and time-consuming rounds of quality-control efforts with the factory, only 35 bags out of 57 orders have made their way into customers’ hands, and Driver’s confidence in his new venture has taken a serious beating.

“It’s been difficult and stressful, and I feel like I’ve let my backers down to a certain extent,” says Driver. “I’m grateful for their support and I want to do everything I can to meet their expectations. As for Packswell, it’s still too early to tell whether the company will take off.”

The first backers to receive their packs waited two months past the initial delivery estimate, while 39 percent are still waiting. But given the standard set by other crowdfunded ventures, Packswell is doing pretty well.

The wisdom of crowdfunding

When someone needs cash for a new venture, there are lots of ways to get it. Traditionally, most people either dip into their personal savings account or borrow funds from friends and family. If their idea is more ambitious and they need more money than they can raise from their personal network, they can pitch their idea to venture capitalists. But VCs are a tough crowd, because they’re keen to get their money back and turn a little profit. Crowdfunding offers an alternative that skips the traditional gatekeepers.

In principle, crowdfunding doesn’t work like traditional financing. You’re not borrowing the money, and there’s generally no expectation that you’ll pay it back or give up a slice of potential profits at any point. Instead, people are simply donating the cash—typically via online platforms like Kickstarter and Indiegogo—sometimes in return for the promise of a reward once the venture successfully launches. For instance, backers of the Pebble smartwatch received watches once the product was ready for market.

Of roughly 60,000 unsuccessful projects, nearly 40,000 failed to reach even 20 percent of their funding goal.

An emerging variant of crowdfunding making its way through legislative hurdles right now would offer more-traditional equity transactions, bringing crowdfunding more in line with traditional financing options by giving backers a share of the venture in exchange for their cash. Equity crowdfunding still faces substantial legal obstacles before it comes to the United States, because it opens up significant potential for fraud.

Crowdfunding successes like Pebble and Double Fine get a lot of press. But for the majority of crowdfunded ventures, would-be entrepreneurs never get the chance to experience the joys of manufacturing and the woes of shipping delays. According toKickstarter’s own stats, only 44 percent of projects meet their funding goal. Of roughly 60,000 unsuccessful projects, nearly 40,000 failed to reach even 20 percent of their goal. Indiegogo, meanwhile, is less forthcoming about its projects’ performance, though efforts to calculate its success rate from scraped Web data peg it near 34 percent.

For entrepreneurs considering how to fund a new venture, those failure rates are worth a sober look. According to Professor Gordon Burtch at the University of Minnesota’s Carson School of Business, a public failure on Kickstarter or Indiegogo can be like a death sentence in the eyes of venture capitalists.

“Crowdfunding can be a useful validation of whether you have a viable business,” says Burtch. As an example, Burtch cites Pebble, which wound up receiving post-crowdfunding venture capital in response to its wild success on Kickstarter. But if your crowdfunding campaign comes up short, your prospects for convincing VCs to invest will be very, very low.

Even if you defy the odds and meet or exceed your campaign goal, you will likely face serious challenges. Most successfully funded reward campaigns run into serious hurdles in manufacturing and shipping a successful product. That’s at least partly due to the prevalence of novice entrepreneurs—people with great ideas but little or no business, supply chain, and manufacturing experience—in the crowdfunding world.

“Getting funded is just the beginning,” says serial Kickstarter entrepreneur Zeke Kamm, whose Aviator Travel Jib venture raised a whopping $223,192 against its initial fundraising goal of $20,000 in July 2012. “People make it seem like winning the lottery, but it could not be further from that.”

With three successful Kickstarter campaigns under his belt, Kamm is a shining example of the magic of crowdfunding. With support from a network of colleagues and friends acquired over a 20-year filmmaking career, the Hollywood veteran blew the doors off of three successive fundraising campaigns, raking in more than $317,000 in all. But getting those projects from funding to shipping—let alone to profit—wasn’t easy.

As with most crowdfunded capitalists, business and manufacturing were not among Zeke Kamm’s primary skills when he set out to start his first venture. The learning curve was steep.

“I read thousands of pages of business books,” says Kamm, “and I studied hundreds of successful Kickstarter campaigns to learn what worked and what didn’t.” Kamm attributes much of his projects’ success to that diligence and research.

But, like the overwhelming majority of crowdfunded ventures, Kamm experienced severe delays in manufacturing his products. His first product, a small plastic clip for securely storing camera-lens caps, shipped to backers more than three months after the originally promised date. Same with his second, the Aviator Travel Jib. The third project, known as the Rocket Travel Slider, raised just shy of $88,000 in May. It’s currently more than a month behind schedule, and Kamm reports that the product will begin shipping to backers once one he resolves one last manufacturing problem.

“Manufacturing is hard,” says Kamm. He looks to bigger companies to illustrate his point: “Even Apple has shipping delays.”

Kamm’s point holds true for most crowdfunded entrepreneurs. If major technology manufacturers with global reach and billions in resources struggle to get products out the door on time, what chance does a first-time entrepreneur have, flying solo with a crowd-funded war chest of a few thousand bucks? About a 25 percent chance. According to aJune 2013 study by researcher Ethan Mollick, of the University of Pennsylvania’s Wharton School, more than 75 percent of crowdfunded ventures deliver the goods much later than promised, with many delivering more than eight months behind schedule, if at all.

Why bother with crowdfunding?

So what, apart from the money itself, does crowdfunding offer a fledgling venture? In anApril 2013 paper coauthored by Burtch, Anindya Ghose of NYU’s Stern School of Business, and Sunil Wattal of Temple University’s Fox School of Business, one clear benefit stood out: Crowdfunding gives new ventures an opportunity to generate valuable publicity.

“Crowdfunding helps to create a lot of buzz, word-of-mouth, and awareness of a project, which then eventually helps in the final demand or consumption of that project,” says Ghose.

But there’s a catch: Getting this boost typically takes time, so projects with short funding durations often miss out. “Projects that take twice as long to meet their funding target, on average, experience a 22 percent increase in demand after the project is completed,” Ghose says. “This appears to validate a widely held belief that a key benefit of the crowdfunding model is the potential it offers for awareness and attention-building around causes and ventures.”

Ultimately, crowdfunding offers entrepreneurs a new way to skip the traditional gatekeepers of the finance world and get their ventures funded when VCs won’t kick in. But it’s not necessarily the best option for every business. Many would-be entrepreneurs would do well to try raising funds from venture capitalists, or even friends and family, before turning to Kickstarter or Indiegogo—particularly if the venture is more modest.

“Don’t bother Kickstarting something that’s very inexpensive,” says Kamm. “Borrow from your family or find another way, because if you don’t have a huge reach, it’s not worth it.”

Considering taking a stab at crowdfunding your bright idea? Here are five key ways to increase your venture’s chances:

1. Consider other funding options first. It’s worth taking a stab at funding your project via friends or family before risking a public flop on a crowdfunding site. You can always turn to crowdfunding as a last resort, but a failure on Kickstarter or Indiegogo can ruin your chances of raising money from friends or VCs.

2. Go for a longer fundraising period. One of the main benefits of crowdfunding is its ability to generate buzz, but that buzz takes time to build.

3. Tap your social network. Hard. People you don’t know are unlikely to fund your project if it has no backers at all. The more Facebook friends you can share your idea with, the better your odds of gaining early backers for your campaign.

4. Budget for waste. Mistakes happen, and mistakes cost money. If you don’t factor manufacturing errors, supply-chain problems, and other additional costs into your budget, they’ll end up eating your profits (or your personal savings). Pad your budget by at least 10 percent.

5. Pad your timelines. If everyone on Kickstarter padded their delivery estimates by three months, hardly anyone would deliver late. No matter how long you really think it will take to ship your product, add a few months to that.