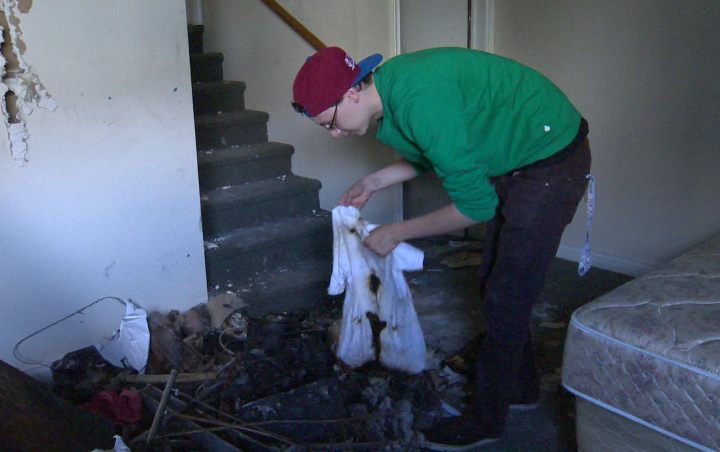 HALIFAX – Tyler McCaig is starting off his school year differently than most: he is crowdfunding to replace items destroyed in a recent fire.

Right now, McCaig, who is studying print production at Nova Scotia Community College, NSCC, is trying to salvage whatever he can after a fire ripped through his Duncan Street apartment last Monday morning.

The blaze started in the boiler room, which is attached to McCaig’s bedroom.

He and his roommates managed to make it out unharmed, but smoke and water damage have ruined the majority of the roommates’ belongings.

“There’s a lot of smoke damage in our clothing and furniture. We can’t really put it in a new house [because of the] toxic fumes,” McCaig said.

He rummages through a pile of charred and destroyed belongings, picking out a “I love NY” t-shirt with scorch marks and the remnants of a laptop.

In the garage sit a sofa and a couple mattresses that are heavy with smoke. McCaig and his roommate Ian McInnis say the furniture isn’t usable anymore.

It isn’t much better on the main floor: a futon sits in the living room but there is so much smoke damage to it, it is headed to the dump.

There also sits a huge garbage bag filled with items to be thrown away.

“There’s a pillow, sleeping bags and jackets that are probably going to be tossed out,” McCaig said.

The severity of their situation and tight budgets saw the male roommates turn to the crowdfunding website IndieGoGo.

McCaig and his roommates turned to the crowdfunding website IndieGoGo to raise money to replace their destroyed belongings.

The men, who did not have renter’s insurance, are currently living in a new apartment since their old one is uninhabitable. McCaig and McInnis say the money will be used to buy new mattresses, furniture, bedding and clothes for the roommates. Their goal is $500.

“We lost a lot of stuff and the best way to raise money in my opinion is stuff like this, which you can crowdfund,” McCaig said.

They say the perks are the least they can do.

“By having something we can give them in return for a money donation, it just shows how much we appreciate it,” McCaig said.

“It’s just nice to say thank you for a lot of the stuff that people have been doing. We are in a tough situation but we always like to give.”

McInnis says the roommates are grateful for any donation, no matter how small.

“We know a lot of people can’t really afford to give five bucks. When people do that, it adds an extra bit of sentiment,” he said.

“I don’t think any of us could live with ourselves if we didn’t do something to help them.”

The roommates know their campaign is different than most and are astounded by the response so far.

“It’s very humbling to see how many people were actually concerned and wanting to help out,” McInnis said.

“It’s just been like a really big hug from the community,” McCaig said.

The fire department says the cause of the blaze is undetermined.