From crowdfunding to ‘real’ business: this glasses-free 3D tablet is trying to go big 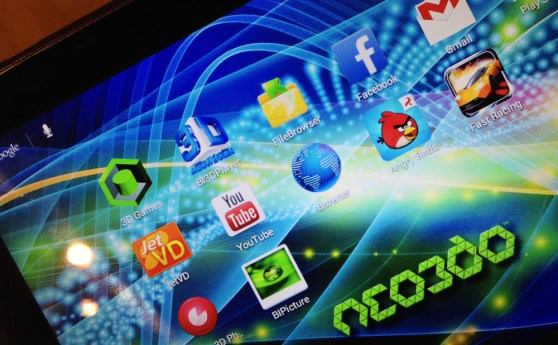 From crowdfunding to ‘real’ business: this glasses-free 3D tablet is trying to go big

What happens after the crowdfunding campaign — after Indiegogo or Kickstart, and after delivering the products that you promised?

If you’re NEO3DO, the answer is international sales.

The NEO3DO is a glasses-free 3-D tablet that dynamically converts 2D content into 3D content, thanks to dual graphical processing units and a dual-core A9 processor. After partners Nick Spriggs and David Briggs launched it on Indiegogo earlier this year, the duo built about 1,000 of the 8″ units, delivered product to their backers, and are now taking the next step in commercialization.

“The technology is called parallax barrier … we display a simultaneous left eye and right eye pair of images, and the parallax barrier is like a fence that splits the pixels, which your brain re-assembles to create the Z-space volume: depth perception,” Spriggs explains. “We started shipping July 15, we’re now in 14 countries, and getting reseller requests internationally.”

I played with a demonstration tablet to check the 3D effect.

For 3D content, the experience of glasses-free depth is astonishing. There’s real volume, almost heft to images and movies, and you can definitely see which parts are close, and which are far. It’s at least as good as I’ve seen on 3D TVs with $200 SD glasses. For standard two-dimensoinal content, NEO3DO converts video and images into 3D with what Spriggs calls TriDepth software, which he says expands the amount of 3D content to almost infinite, and in some cases looks better than native 3D video.

“I actually believe the conversion algorithm is more robust than native stereoscopic capture,” he told me today.

I’m not certain that’s the case, and some of the upconverted 2D content I watched didn’t look as good as native 3D content, but it is at least a noble effort. And, the saving grace is that with unique requirements of shipping a 3D screen, even 2D content looks better — brighter, for instance.

You won’t need these …

But there is more 3D content out there than I knew — including Google Earth.

“Google Earth is one of my favorite demos,” Spriggs said. “It’s like you’re in a helicopter – it’s just uncanny how good the imagery actually is.”

The next step is commercialization beyond crowdfunding, and Spriggs and Briggs have big plans.

“We’re presenting next week at Tech Cocktail in Last Vegas, and we’ll be in front of all the major retailers by the end of the month,” Spriggs says.

The Android tablet market is fairly fragmented — after the Amazon Kindle, which hardly counts, and the Galaxy Tab, there’s a lot of little players trying to carve out market share. At $349 retail, the NEO3DO is one of the pricier medium-sized tabs, but it’s also one with higher specs, and a lot of connectivity, including multiple charging cables in the box.

And, of course, if you want to experience 3D on your sofa, there are not many other options.
Source: Venture Beat