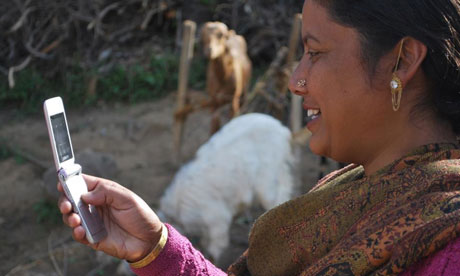 In August, two Norwegian students raised $32,000 (£20,000) on the crowdfunding platform Indiegogo to fund life-saving surgery for Roona, an 18-month-old girl from Tripura, India. She had been diagnosed with hydrocephalus, a condition which causes swelling of the brain.

Roona is now in recovery, but the campaign to save her is an example of how crowdfunding is being used by individuals and organisations to bring about positive change in the developing world.

Similarly, Radar, a British citizen journalism organisation, is using the same platform to raise £11,500 to improve reporter security. Radar trains and supports people from isolated and disadvantaged communities in Africa and Asia to send their news and perspectives via SMS. These reports are received and verified at a London hub before being shared online. But with increasingly sensitive subject matter – including corruption, gender violence and slavery – a new secure and more efficient digital platform is required.

Mohamed Camara from Freetown, Sierra Leone, recently reported a storm that swept away shacks lining Freetown’s slums via Radar. “In slums, we live by SMS,” says Camara. “It is the only [method] we can use to report news. People living outside [Sierra Leone] do not know some of the lives people live in these areas. As a citizen reporter, I believe I will be an eyewitness to the stories as they happen.”

Radar’s co-founder Alice Klein says the service gives a voice to those traditionally excluded from mainstream news including women, minority groups and people without access to the internet or computers. But the crowdfunding campaign could give the start-up organisation the financial support needed to protect reporter data and add more reporters to the network.

“Just like mobile citizen reporting, crowdfunding is a new and innovative way to raise funds swiftly,” says Klein. “We raised our first £1,000 within 48 hours and we’re really hoping we reach our target by September 12th.

“Radar has achieved so much in its first year but with this new platform we can grow even stronger. We will set up new networks and ensure those we’ve trained elsewhere have the tools they need to continue their great work. It will also allow us to receive, verify and edit stories on the go via a bespoke web app.”

While Radar is using Indiegogo for its campaign, there are many other crowdfunding platforms that cater exclusively to charities and development projects. These include Crowdrise, Global Giving, Donors Choose, Catapult, and Raise 5.

Crowdfunding can also be used to raise funds for healthcare. In October 2012, Fieldcraft – a social storytelling organisation set up by social media expert Liz Scarff – launched a campaign called iCancer to crowdfund £2m to trial a cancer-busting virus.

If successfully developed, the virus could potentially extend the lives of those with neuroendocrine tumor (the cancer which killed Steve Jobs) but without funds, the virus would remain untested, sitting in a freezer in Sweden. Scarff harnessed the power of crowdfunding, promoted via social media, to attract more than 4,000 donors from around the world.

“We never use social media in isolation,” she says. “We create campaigns that build a symbiotic relationship between social media, media, PR and government relations – if relevant – and iCancer was no different.”

Her team eventually raised their target within eight months and preparations to begin a clinical trial of the virus are underway.

The perception that crowdfunding exists only to fund tech startups andindependent movies is being challenged by platforms that fundraise for local civic projects. These include Citizenvestor in New York andSpacehive in London, which allow citizens to pay for infrastructure, property development, public amenities, arts and parks.

Andrew Teacher, Spacehive policy director, says: “Crowdfunding is about bringing people together and getting buy-in to an idea as much as raising cash. Our uniqueness comes through supporting civic projects. As a platform, it offers a lot of support for users – from marketing and PR advice to the opportunity to plug into match-funding schemes provided by the likes of Experian and even Boris Johnson, mayor of London.”

Teacher’s team have created more than £1m worth of projects, proving crowdfunding can be used to fund a wide range of projects – from a children’s play bus touring Hackney estates to the roof of a warehouse turned theatre – so long as people think the cause a worthy one.

Some might argue that public funding of development – from the community to international levels – gives authorities an excuse to simply avoid paying for services themselves. But only genuinely popular ventures secure funding.

Accounting firm Deloitte predicts web users will contribute $3bn to crowdfunded campaigns this year alone, double what they raised in 2011. This suggests that, if anything, interest in funding development projects is on the rise, and the web is increasingly seen as the most innovative and responsive place to raise funds for projects that matter.