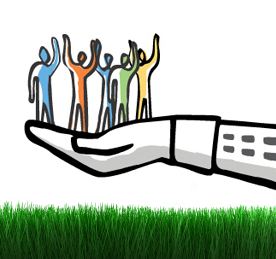 The basic concept is this: Founded by Gainsville, Fla.-based Sam McPherson, the site promotes projects aimed at addressing major areas of need, like health or human rights abuses. But the way it happens is consumers buy an organic cotton tote bag or backpack for $25, and $5 from those revenues goes to help an organization involved with one of those projects. Example: the Alaska Sudan Medical Project, which is trying to build a school in South Sudan able to supply 400 children with clean drinking water.

McPherson started toying with his idea when he was an undergraduate atPace University, studying entrepreneurship. During his studies–he graduated in 2009–he went on several trips to help repair schools in Guatemala and there he got the germ of the concept. Originally, he envisioned a one-for-one kind of an ecommerce model, whereby, for every customer who bought a backpack through his web site, the company would donate a backpack filled with supplies to a school. McPherson still had that vision in mind when he enrolled in the Hough Graduate School of Business at the University of Florida to get an MS in entrepreneurship. He even entered into and won the University of Florida chapter and business plan competition of the Net Impact Walmart Better Living Plan Challenge.

But as he talked more to other people in the social enterprise area, he started thinking his business model was flawed. As he saw it, his social enterprise basically would be giving away handouts and that wasn’t what he was after. “I wanted to have a bigger impact,” he says. At the same time, he became intrigued by the promise of crowdfunding. Eventually, as most entrepreneurs do, he revised his idea pretty dramatically, so that, by the time he graduated last year, he had his plan fully hatched.

Working with a Washington, DC-based organization called Global Giving, a charity fund-raising web site for social entrepreneurs and nonprofits, Reciprocity & Co. would feature projects sponsored by various organizations, aimed at addressing one of five areas: health, hunger, human rights, children and education. When the site launches on September 15, there will be one project for each cause. Aside from the venture in South Sudan, that includes an effort sponsored by the Nepal Youth Foundation, an organization in Nepal working to educate parents and children about hygiene and nutrition (hunger);  GoodWeave, a group that rescues children forced to work for carpet makers in Southeastern countries (human rights); Dream Home, which rescues girls forced into sex trafficking (children); and the Nyaka AIDS Orphans Project, which provides free education, food and medicine to children whose parents died from AIDS (education).  Also, each area of need will have its own color–health is blue, for example–and the tote bags and knapsack handles or straps will bear that color.

Initially, the goal for each project will be $1,000. Eventually, McPherson hopes to expand that amount and include as many as five or six projects for each cause.

As for finding a company to make the tote bags and backpacks, that took a lot of work. According to McPherson, he talked to more than 20 potential manufacturers. His first supplier insisted that the backpacks would cost more than $75 each to produce. Eventually, he found   a Bedford, Mass.-based manufacturer Enviro-Tote, which was willing to charge a lot less.

Since the official launch of the site, which McPherson developed with his brother-in-law, a web developer, is mid-September, you won’t be able to get access to it until next month.

So, a dash of crowdfunding, a sprinkling of retail, and a lot of worthy causes: We’ll see what happens as the company evolves.