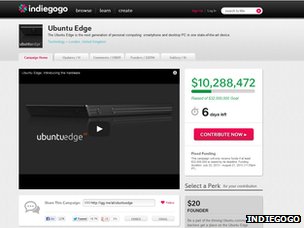 A crowdfunding campaign for the Ubuntu Edge smartphone has set a record for raising more money in pledges than any other such venture.

The London-based developer, Canonical, has generated $10,288,472 (about £6.6m) in pledges, passing the record set by Pebble smartwatches last year.

But with six days of its campaign left the company is far from reaching its funding goal of $32m.

Canonical would have to return all the money if it does not reach the target.

The developer had said that if its campaign on the Indiegogo crowdfunding website was successful, it would aim to deliver 40,000 handsets to qualifying backers by next May.

In an interview with the BBC, Canonical founder Mark Shuttleworth said public interest in the Ubuntu Edge smartphone was high.

“The campaign has sparked a level of interest that has surprised even us,” he said, adding that the campaign seized the attention not only of phone enthusiasts but innovators and futurists as well as manufacturers.

He added that some large manufacturers had come “out of the woodwork” to discuss the device with him.

Last week, Bloomberg said it had made an $80,000 contribution to the campaign, explaining that the open-source initiative could benefit its clients and influence the future of mobile computing.

But Mr Shuttleworth conceded the product might be too much of a departure from the current generation of smartphones for many institutional investors, such as major telecom companies, to consider backing it now.

If the Edge managed to find enough funding, “we would have been bringing the future forward a year or two at least”, Mr Shuttleworth said.

Programs on the proposed smartphone would look like standard mobile apps when the handset was being used as a standalone device.

But they would change their user interfaces to that of a desktop application when the phone was docked with a monitor, Canonical said.

In addition, the operating system could support apps written in the HTML5 web language, albeit at slower speeds.

Particularly in regions such as Asia, Mr Shuttleworth said, businesses as well as individuals expressed interest in this type of device.

But he acknowledged that, with one week of the campaign left, there was still a long way to go to meet the funding target.

“We were mindful that tripling a record is always a big stretch and a big ask,” Mr Shuttleworth said.

“Risky new technology is difficult for mainstream manufacturers,” he said, adding that the campaign’s funding target was “head and shoulders” above anything else. 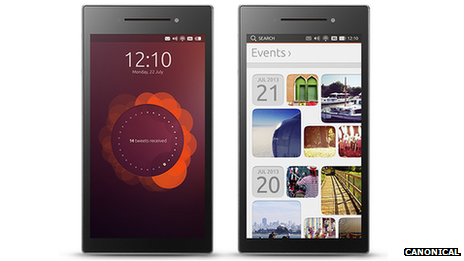 According to Chris Green, senior consultant at the Davies Murphy Group, “$10m in crowd-sourced funding is a huge achievement, a very powerful and distinct message”.

But he added that Canonical’s strategy of raising all the money through a single crowdfunding campaign was “naive”, and the developers chose the wrong platform for it.

“It was a smart move to go straight to buyers and say, ‘Be part of the future,’ ” Mr Green said. “But they would have had a better chance of tapping into funding if they went for a bigger platform, just because of the sheer base.

“They need to really start looking at more conventional forms of fundraising,” he added.

Mr Shuttleworth admitted there were lessons learned in the campaign. For example, he said he would rethink the discounted price offered to early contributors.

Backers were asked to commit $600 on the first day or $830 on the remaining days of the campaign to secure a handset, roughly double the cost of LG’s Nexus 4 mobile, which supports its software.

But Mr Green said Ubuntu’s pricing was an “absolute bargain”, adding: “The product was sound. I would not say it is expensive.”

Mr Shuttleworth said that if the campaign made significant gains in the coming days, Ubuntu would consider extending its online campaign. If it remained far from its goal, all the money would be returned to contributors.

Canonical makes money by charging for support and training for Ubuntu and also plans to take a share of sales from online marketplaces offered by handset makers who adopt its software.

It is seeking to gain ground in an increasingly crowded smartphone marketplace.

Canonical’s campaign will run until 21 August.