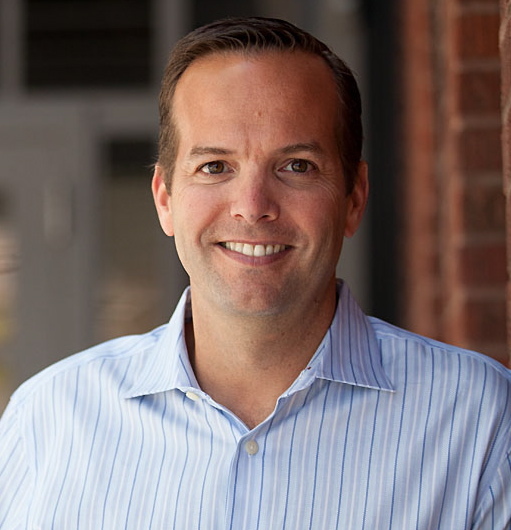 In 2012, Dave Girouard stepped down as president of Google Enterprise and decided to take his life in a completely different direction. Along with a few fellow ex-Google employees, Girouard founded Upstart, a crowdfunding platform that offers college students

and graduates (“upstarts”) the capital, support and guidance they need to pursue their entrepreneurial dreams. Backers provide startup money for upstarts of their choosing, and in return, the upstarts share a small portion of their income over the next 10 years. In an interview with BusinessNewsDaily, Girouard shared his journey from Silicon Valley executive to entrepreneur

, and how he ended up doing what he loves.

BusinessNewsDaily: Explain what you do for a living.

Dave Girouard: I’m founder and CEO of Upstart, a 13-person company in Palo Alto, Calif., that I founded 15 months ago after spending eight years at Google. We’re creating a marketplace that allows people to raise money in exchange for a small share of their future income. We’re taking an idea pioneered in the 1950s by Milton Friedman —human capital

contracts — and bringing it to life, making capital accessible to more people on fair and reasonable terms.

BND: How did you end up doing this?
DG: I grew up near Boston and went to college in New England, but I’ve been working in the Silicon Valley for most of my adult life — almost 20 years. I was a product manager at Apple in the “dark years” before Steve Jobs came back, and I was an early employee at a video-search startup that was about a decade before its time. More recently, I spent eight great years at Google, building the Google Enterprise and Apps business from almost nothing to more than $1 billion. Working at Google was a phenomenal experience, but I had the itch to prove whether I could build something myself, without the Google pixie dust, so to speak. I also concluded that as cool as my Google experience was, it wasn’t the end of the awesome things I could do in my career — I wanted to prove that I could do something even cooler.

[10 Reasons to Do What You Love for a Living]

Through some conversations with younger people who were just getting started in their careers, I noticed a disturbing trend: Lots of kids have really ambitious ideas and concepts they’re excited about, but they’re forced instead to take the “safe job” because they havestudent loans

to pay back and otherwise lack the capital needed to get started. It occurred to me that if we could find a way for a person to borrow from their future selves, from a time when they’re statistically likely to earn a fair bit of money, it could unlock a lot of exciting careers. At the same time, it could unlock the type of innovation and job creation that the U.S. economy desperately needs. I tugged on that thread for a few months, and the idea for Upstart emerged.

BND: What was it like to go from Google Enterprise president to running a startup?
DG: The first word I use to describe the change was “liberating.” When you build a big business with a large team over many years, you accumulate a lot of baggage — employees who count on you, customers who know your cellphone number, meetings that seem to replicate like cell division gone bad. And one day, it was all gone. I woke up with six new emails in my inbox instead of 600. Everybody needs a fresh start every once in a while, and it was fun, for at least a little while, to be the boss of nobody but me. And not having a boss didn’t stink too much, either.

BND: What is the most important lesson you’ve learned while running your company

?
DG: Our company’s ability to predict consumer behavior is remarkably bad — or at least mine is. We’ve had several ideas about what our users wanted that we were utterly certain about, only to be shown we were wrong. I’ve learned that people’s viewpoints are shaped by their own experiences, and that they can’t generally be trusted as guides for how others will respond. Steve Jobs was probably an exception — the rest of us need data.

BND: What did you want to be when you grew up? Did you ever think you would be an entrepreneur?
DG: I grew up in the ’70s, so I wanted to be an architect, like Mike Brady [from “The Brady Bunch”]. He had this superawesome desk in this sweet office, where he got to hide away and draw his plans. My parents were a teacher and a military pilot, so I can’t say I had a real model for entrepreneurship while I was growing up. But I did have a model for working your tail off to give your kids a better life, which was nice.

BND: Why do you love your job?
DG: There’s nothing more rewarding than starting with an idea that’s purely in your head, and seeing it come to life. And when you see your creation begin to have a positive impact on real people’s lives, it’s like a dopamine hit you get nowhere else. That’s worth all the problems of being a founder.

BND: What’s the biggest misconception about your job?
DG: Most people think startup life is so crazy and demanding compared to “big-company” jobs. That might have some truth to it, but in reality, I feel much more in control of my life and my time than when I was at Google. Even with all the startup craziness, there’s a real niceness in having some control over your calendar and how you choose to spend your day.

BND: If you didn’t do your job

, whose job would you like to have, and why?
DG: I would certainly be a rock star if I could. I haven’t played in front of an audience since my 8th-grade band concerts, but I’d definitely switch places with [Coldplay lead singer] Chris Martin in a second.

BND: Do you think having a job you love has made you a better person in other areas of your life?
DG: My job has definitely affected my devotion and interest in helping others with their startups

and careers. Needing so much help myself, I can’t help but want to do whatever I can for anybody who’s taking a similar risk. As a startup founder, helping others — with no expectation of recourse — is such a wonderful thing, because it’s the only time you can’t really fail.

BND: What’s your best advice to other people who are trying to pursue their career dreams?

DG: Don’t wait, and don’t hedge. I constantly think about the concept of “deathbed regrets” and let it guide my decisions. Nobody will ever regret taking their shot at creating something meaningful and unique in the world.