Guest blog: How much CO2 pollution do solar panels save? 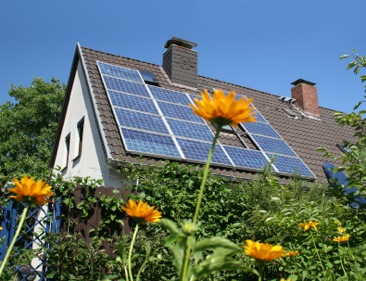 Guest blog: How much CO2 pollution do solar panels save?

A typical solar PV system on a single British house can save almost a tonne of CO2 pollution every year. Here we look at the issues involved in this calculation, from the energy intensive manufacturing process to common myths about back-up fossil fuel plants.

Installing solar panels on a south-facing roof in southern Britain is an investment worth serious consideration. The Energy Saving Trust estimates that a standard-sized household system installed today will deliver a first year income of over £600, and earnings over 25 years of £12,279 after an initial investment of £6,750. This is in large part thanks to the Government’s feed-in-tariff scheme that provides a guaranteed, inflation-linked income.[1]

But what about the environmental benefits of installing solar panels on your roof? How much carbon dioxide pollution is prevented as a result?

How much electricity do solar panels generate?

First of all, calculating the electricity the panels themselves produce is relatively simple. Broadly speaking, it means taking into account the maximum capacity of the panels alongside the amount of solar irradiation that hits them (dependent on latitude, weather, angle of roof etc).

In Brighton, assuming normal amounts of sunshine, a 3.5kW solar PV system (14 x 250W panels) would produce around 3,000 kWh p/a – over two-thirds the average annual electrical consumption of a British household (4,266 kWh according to the Government)

Of course in reality much of the electricity produced by a household’s solar panels will not actually be used by that household. On dark winter evenings electricity must still come from the national grid, and on summer afternoons the excess we don’t use will still be exported back into the grid.

How much CO2 is saved by displacing electricity from the National Grid?

A simple initial calculation of carbon savings from solar panels involves the assumption that all of a household’s solar electricity directly displaces ‘grid’ electricity produced by large commercial power stations. The question, then, is what quantity of CO2 emissions are saved because these power stations are producing 3,000 kWh less every year?

The standard way of calculating this is by using the ‘average grid carbon intensity’ – the average amount of CO2 emitted for each kWh of electricity produced for the grid – estimated at 445g CO2 in 2013. This figure irons out some big differences between coal power which emits a lot more carbon, and nuclear power which emits a lot less.

A more conservative approach, however, is to assume that solar power displaces the most common form of relatively efficient gas power plants commonly used to ‘top-up’ supply to ensure demand is met at any given time. National Grid PLC have recently estimated these ‘CCGT’ plants currently emit 392g CO2 / kWh.

Thus, using this conservative figure, we can say that in terms of electricity generation alone, a standard household solar PV system in southern Britain saves almost 1.2 tonnes CO2 every year.[2] This is equivalent to the amount of CO2 an economy class passenger emits on a return London-New York flight.

But what about the CO2 footprint of the solar panels themselves?

This figure doesn’t tell the whole picture however. The manufacturing process for solar panels is energy intensive with most of this energy coming from burning fossil fuels. Many solar panels are made in China where ‘dirty’ coal makes up much of the country’s power supply.

Because of this, a recent parliamentary paper estimated ‘cradle-to-grave’ emissions of solar power in the UK to be 88g CO2/kWh, whilst noting this will reduce over time.

But if we take this figure as accurate for now, it suggests the estimate of CO2 savings from a standard household solar PV system in southern Britain should be reduced to 0.9 tonnes CO2 p/a.

Finally, it’s true that for the foreseeable future the UK will need ‘back up’ fossil fuel plants to step in and produce extra power at times when intermittent renewables such as solar power are not generating. Very few people would contest this point.

Where there has been debate, however, is around the issue of any additional carbon emissions caused by the inefficient use of these back-up plants. Some have even claimed that the indirect consequences of building wind turbines mean that no CO2 savings whatsoever are realised.

The detail of this debate is highly technical and concerns how the grid as a whole responds to renewables. But in basic terms the ‘no savings’ case (available here, courtesy of the Global Warming Policy Foundation, GWPF) assumes that the back up power we need will be provided by a particular type of highly inefficient gas power plant (OCGT) operating much of the time.

However a number of powerful arguments stand against this ‘no savings’ perspective, strongly suggesting it is untrue.

First, a detailed rebuttal prepared by Imperial College London based on an extensive review of over 100 peer-reviewed papers described the GWPF scenario as “balderdash”. Given the high running costs of these inefficient OCGT gas plants, the idea they would be used more than very occasionally is “economically absurd”.

Second, real world evidence clearly shows that intermittent renewables do reduce carbon emissions. For example, recent analysis of national grid data by Mark Lynas and Chris Goodall clearly demonstrates that when the wind blows less gas is used. And National Grid themselves have recently reported to the Scottish Parliament that reduced efficiency of back-up plants has reversed less than 1% of the carbon savings delivered by wind farms.

Finally, comprehensive studies by both National Grid (here) and the Committee on Climate Change (here) have modelled future scenarios demonstrating that much larger amounts of renewables than we currently have can be accommodated and will result in large carbon savings.

In sum then, we can say with high confidence that the need for back-up fossil fuel plants does not materially affect the carbon savings delivered by intermittent renewables. Whilst further action may be needed to ensure this remains the case in the future, a standard solar PV system installed in Britain today will save 0.9 tonnes CO2 per year, or around 23 tonnes over a 25 year lifetime.

Sam Friggens writes for Abundance Generation, an online investment platform that allows anyone to invest in renewable energy for as little as £5.

You can invest in Abundance Generation renewable energy projects through Ethex

1. These figures were produced using the Energy Saving Trust’s Solar Energy Calculator. They assume a 3.5kWp system (14 x 250Wp panels) mounted on a south facing roof at 40 degrees with no shade. The house is an average 3-bed in Brighton with minimum EPC rating D (therefore eligible for the full FiT rate as of July 2013) using 3,084kWh electricity p/a.