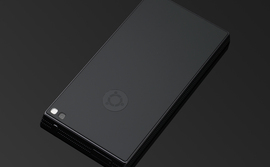 LINUX SOFTWARE HOUSE Canonical’s decision to crowdfund the Ubuntu Edge smartphone stretches both the concept of crowdfunding and the image of Canonical’s faith in its vision of thin client computing to the breaking point.

Canonical CEO Mark Shuttleworth announced that the firm is seeking $32m to produce 40,000 Ubuntu Edge smartphones, each of which when connected to a dock will become a thin client. The surprise is that Canonical, a for-profit commercial entity, is not willing to put any significant resources behind a ‘halo product’ that will help it win support contracts, and is instead asking for money from its supporters using the increasingly popular crowdfunding model.

Canonical and Shuttleworth, however, seem to offer less than support to those willing to pledge money, with specifications that look more like a list of aspirational goals.

Shuttleworth was repeatedly asked by journalists what processor the Ubuntu Edge will have after the firm provided a vague statement saying that the device will be a “fast and powerful device with a multi-core CPU and at least 4GB of RAM”. Shuttleworth didn’t help matters by using vague phrases about being “in talks with major silicon vendors”.

The problem with the Ubuntu Edge is that the list of specifications given so far points to neither a high-end smartphone nor a low-end laptop, which could limit the usefulness of the 128GB of flash storage. Canonical might point to the Ubuntu Edge as being a Chromebook that offers a full fledged operating system, but even as a thin client it might not be worth much.

Shuttleworth was hassled about processing power for good reason because the 4GB of RAM he mentioned strongly suggests a 64-bit processor, even though a 32-bit chip with physical address extensions can address 4GB of RAM. The first chips based on ARM’s 64-bit ARMv8 architecture are expected to appear later this year, but they will be aimed at low-power servers and will still use too much power for a smartphone, while Intel’s 64-bit Atom Centerton chip consumes more than 6W, and Avoton, another Intel server chip, is expected to ship later this year with power usage characteristics that suit servers rather than smartphones.

But if Canonical does go for an ARMv8 chip inside the Ubuntu Edge then there is the question of whether Canonical’s Ubuntu operating system will actually be ready for prime time on the ARMv8 architecture before the projected May 2014 release date, or preferably a few months before launch. All of these fundamental questions are up in the air and imply a multitude of problems should the firm receive the $32m it is asking for.

On one hand Canonical and Shuttleworth can be forgiven for the list of specifications, primarily because Shuttleworth admitted that many aspects of the Ubuntu Edge are not set in stone, apart from the 128GB of flash storage. He even said that Canonical would listen to those who pledge money, but the problem is that, given that the firm has lost a lot of goodwill for not having listened to long-term Ubuntu users regarding Unity and then the Amazon shopping lens, many will find it hard to trust Shuttleworth again.

What is less forgivable is Canonical’s apparent desire to eliminate any risk to itself and only look for rewards on the backs of its user base by using the crowdfunding model.

Crowdfunding, through schemes such as Kickstarter and Canonical’s preferred Indiegogo, are intended for small startup firms that typically have trouble getting funding from traditional sources such as banks and venture capitalists to develop bleeding edge products or ideas that have yet to be implemented. Ouya is perhaps one of the most famous examples, where a small company projected the idea of a games console running the Android operating system, an idea that at the time was novel and hadn’t been done before.

Yet here is Canonical, an established enterprise software company that counts Google among its customers looking to avoid any potential risk associated with developing a new product and only reap the rewards. Shuttleworth said that the firm didn’t want to get into the hardware business and crowdfunding was a way of gauging what people wanted, but he also said that one investment bank was working with Canonical to deploy thin clients, revealing just how much of a money spinner this could be for Canonical.

Shuttleworth said that Canonical will not match the money that people pledge and that its contribution will be the design of the device. However, given that Shuttleworth admitted that the design of the Ubuntu Edge smartphone is “a labour of love” and that it is an “after hours project”, Canonical hasn’t really contributed anything at all, save generating some nice looking renderings and a vague “specifications sheet” that in May 2014 will not look all that high-end.

Being fair to Shuttleworth, he did admit that should the Ubuntu Edge project hit its $32m target and be made, Canonical will receive some positive effect and “excitement” around Ubuntu as a thin client operating system.

Shuttleworth also said there is a possibility that the Ubuntu Edge smartphone will have other branding, perhaps from the actual manufacturer of the device. Since the money for the Ubuntu Edge smartphone – if it makes it that far – will come from individuals, for them to end up with an otherwise branded device will be a slap in the face for those who put their faith in Canonical.

Canonical has received criticism from some quarters of the community for not being as financially transparent as other firms, such as Red Hat, however given that it is a private company there is no legal requirement for it to be more transparent. But, Canonical asking users to pledge significant amounts of cash for something that will be used by Canonical to showcase its technology and sell support contracts will lead to people asking questions about whether big companies should be using crowdfunding to underwrite product development.

As mentioned earlier, Canonical might be forgiven for the lack of concrete specifications, as Shuttleworth claims things are still up in the air, but that also brings up another question. Canonical is claiming that it will ship a brand new smartphone, one that has an incomplete operating system and undecided hardware, in just 10 months, or nine months after the 31 day crowdfunding programme draws to a close.

Given that established consumer electronics vendors such as Apple, Samsung, HTC and Sony have considerably more resources and established supply chains and still take months to ramp up production, let alone develop the operating system, decide on and engineer the hardware, pass quality assurance testing, gain regulatory acceptance and then get the product in the hands of customers, there are serious questions about whether the device will ship on time, and if it does, whether it will be of release quality.

Canonical and Shuttleworth have managed to generate a lot of press by using the crowdfunding method, but it signifies a certain lack of faith in an “official” Ubuntu OS smartphone and could highlight a worrying trend of established and well funded companies abusing the spirit of crowdfunding to offload risk. Shuttleworth might excuse this as an exercise to see how many people really want a smartphone that can also become a thin client, but the firm really should focus on getting its Ubuntu mobile operating system working with smartphones built by existing manufacturers rather than asking individual prospective customers to fund what after all could end up being a half-baked device in nine short months.