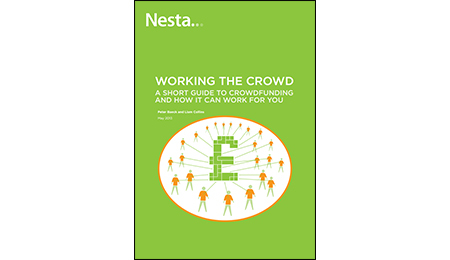 Modern crowdfunding has received many plaudits for how it has taken an age old way of raising funds online and made it easier and more cost-effective to reach large numbers of potential backers. However, crowdfunding can add value in other ways too. This the first in two blogs on this topic.

Putting money towards the development of an innovative product or service is always going to be risky. Will people buy a product? Will users engage with a service? Predicting demand is essential to ensure that the right ideas are backed but it is often difficult to do.

Traditionally, a combination of the funder and entrepreneur would attempt to test this using their knowledge of the market, surveys, focus groups etc, but the capital must still be committed to the project in the presence of uncertainty about the target customer base.

History is full of examples like the DeLorean and New Coke where perceived demand turned out to be absent in reality. Traditional investors often try to account for this using tranche funding approaches to avoid committing too much capital when uncertainty is highest but significant outlays are still made before anyone knows whether a product or service is really valued.

One of the most important features of crowdfunding is its ability to measure demand, interest or engagement in advance of capital being committed. The all-or-nothing model adopted by the majority of platforms ensures that only those projects that have sufficient support get funded. As Julie Urhman who raised over $8½ million for game console OUYA indicates in her pitch,“you’re the signal to the world that this is wanted”.

OUYA was a runaway success, which most projects won’t be but another point it illustrated is the value other types of funders put on demand measurement from the crowd. The games console raised $15m in venture capital since its Kickstarter campaign.

Failure rates on platforms are healthily high as the crowd plays as valuable a role in preventing funding as it does in enabling it. The model not only prevents funds from the crowd being wasted but also sends a valuable indicator to the entrepreneur themselves about the likelihood of their venture succeeding.

The transparency in how a project fails to achieve funding from the crowd can discourage the entrepreneur from committing further amounts of their own capital and effort to the project they should not continue with or need to iterate on. Failure through crowdfunding is also cheap which allows entrepreneurs to try again with a new or altered idea should they wish.

As opposed to focus groups or other methods of measuring demand or popularity in advance of committing funds, crowdfunding has the advantage of measuring real rather than perceived demand. Jesse Potash of crowdfunded publishing platform Pubslush states “authors and their proxies can tangibly measure demand for their book meaning that other demand measurement methods (i.e. Facebook “likes” or email lists) that lack financial association are less valuable. Having 40,000 subscribers to a blog is fantastic, but what’s it actually worth?”

This has been shown in practice by some funding campaigns. Amy DePaola who failed to raise capital for web series ‘617 The Series’ describes how “a lot of people tuned in and spread the word for us but no one was putting in their dollars“.

The model not only allows you to measure demand but also allows you to flex your offering to match the level of demand that exists. This is generally achieved through stretch limits where you can add extra scale or features to what you are raising money for if the crowd is willing to fund its development. The team behind the Roman Lappat & Raffaele Picca Artbook ended up adding a total of 13 stretch goals, from increasing the size of the book to adding stickers.