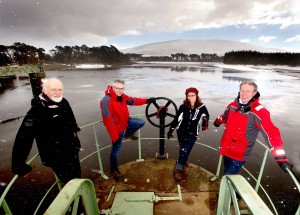 Harlaw Hydro Ltd., located outside of Edinburgh, Scotland, has hit their crowdfunding goal of £313,000 to finance a hydro electric energy plant in a unique twist in community crowdfunding.  The goal was reached via community participation in just 12 weeks.

Back in the Spring of this year, the community had initially considered using local banks to finance the project, according to local reports.  But the organizers were surprised about deep local interest to invest in the project directly.

At the initial meeting announcing the crowdfunding campaign, organizers were surprised by attendance;

Dave Hollings from CMS Co-op Development commented “this is the best response I have ever seen to a community share offer“.

One of the Harlaw Hydro supporters arrived just before the event start:
” I wondered what big event we had unwittingly managed to clash with and then I had to queue to get in to the hall, which was standing room only“.

While the initial configuration of the project is small,  the Balerno Village Trust (BVT) which created the project, hopes to be able to provide 100% green energy by the year 2020.  BVT, a non profit, was founded in 2003 for community development, sustainability, education and heath.  The income generated by the Harlaw Hydro is also expected to contribute to other projects in the community.

Each share was initially listed at £50 with a minimum invested of £250.  Investors are expected to hold the shares at least 3 years plus 180 days after the project starts generating revenue.  The shares are not to be publicly traded and are deemed withdrawable shares.  Harlaw Hydro, as the issuer,. may buy back shares at the discretion of the board.

While dubbed a “social investment”, the clear potential for share yield and tax advantages certainly helped to power the success of this unique crowdfunding project.